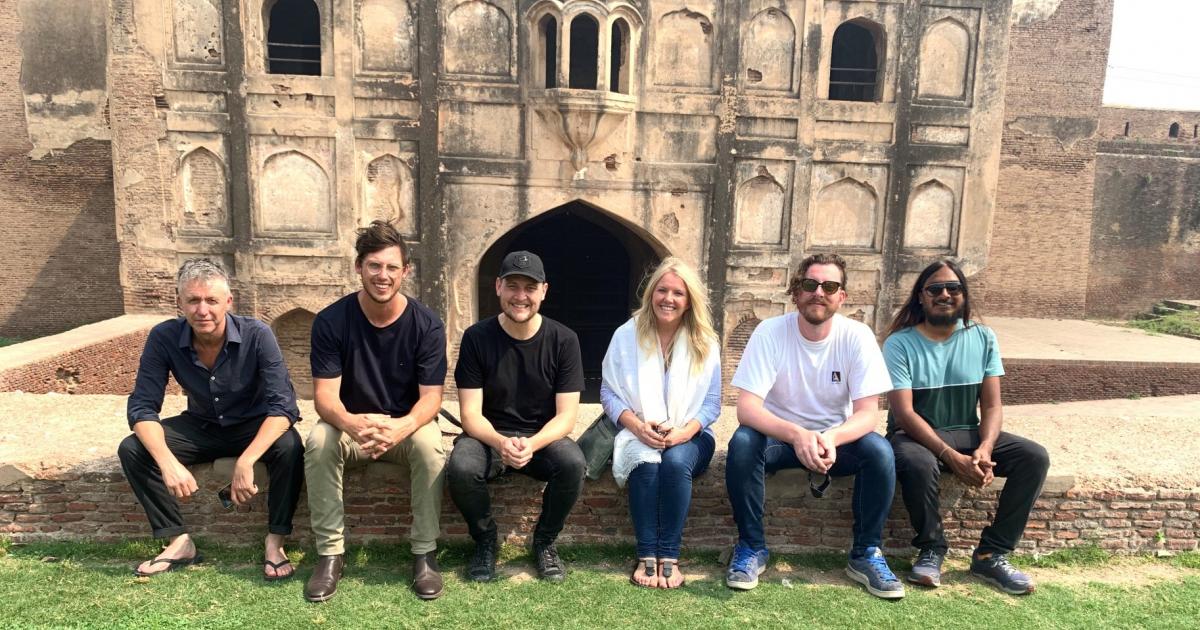 I walked to the concierge desk at the Serena Hotel in Islamabad and shyly asked if they had a copy of the day’s Express Tribune newspaper.

Did I want it delivered to my room? No no. Just the most recent edition.

The staff member took the paper out from under the desk and looked at the first page, looked at me and looked down again.

Even with my mask, there was no hiding place; there, splashed across the top of the front page, was a photo of me laughing alongside words I had tweeted the day before.

“It was worth traveling to the other side of the world for this Babar Azam reader.”

It was a random tweet, one of many innocuous and ironic thoughts I would typically type on any given day while watching cricket.

And yet it was the front page of one of Pakistan’s leading newspapers, well above stories about Imran Khan’s struggle to stay in government and the war in Ukraine.

It suddenly dawned on me that covering cricket in Pakistan was a very big deal.

I knew intellectually that Australia’s tour of Pakistan meant a lot in a country that had been deprived of visiting teams for so many years, especially after New Zealand pulled out of a tour over mysterious security concerns on the morning of a game before England canceled a tour for seemingly frivolous reasons.

But international cricket had slowly returned to Pakistan in recent years, and the PSL was an increasingly thriving domestic tournament.

It was only after spending a few days in the country that I really began to understand the profound importance of this tour and, alongside it, the willingness of journalists to cover it.

Pakistanis have a reputation for being hospitable but nothing can prepare you for hospitality.

It came in the form of widespread media interest. He was there in the people on the street, in the field or in the hotel when they stopped and thanked you for visiting their country; “You don’t know what this means to us,” was a sentiment often heard along with, “Please is there anything I can do to help you?”

Even among the hordes of military and police hired to provide security for the tour, we felt welcome. A guard insisted on showing us around a mosque next to Gaddafi Stadium in Lahore. Another stopped us outside Rawalpindi and said, “We’re here for you.

It was completely overwhelming and unlike anything I have ever experienced while visiting another country.

I had traveled to Pakistan with a fairly open mind; My previous experience of living and traveling through the Middle East has taught me that seeing through the prism of Western media does not always reflect the lived reality in a country.

The most frequently asked question before I left Australia was whether it was safe to travel to Pakistan, especially as a woman; after six weeks of touring i can honestly say that i felt completely safe, although there were times when my male colleagues ventured into areas where they did not feel comfortable with me to take because there were no women in sight, especially women who possessed the attention of light blond hair and white skin (throughout the tour I was certain that I was at risk of developing the syndrome fatigue from the selfie, such was the request).

Early in the series, a mosque bombing in the city of Peshawar – a tragedy that left dozens dead and many more injured – worried friends and relatives back home, but had little impact on those of us in Islamabad.

And, even as the country teetered towards political upheaval and a showdown between Imran Khan and his opponents that would eventually see the prime minister removed from office, a change of venue from Islamabad to Lahore for the white ball matches was performed with little noise. .

One of the biggest misconceptions about covering a cricket tour is that there are working hours between the first ball of the day and the stumps, leaving plenty of time to explore and socialize. the reality is a steady stream of 12-15 hour days that leave little time for tourist activity.

We stayed at the team hotels, albeit outside their Covid and security bubble, as requested by the PCB for security reasons, and that added a layer of complicated logistics to each day.

Roads and wifi were cut, no doubt much to the frustration of locals, for the secure convoy that transported players and officials to and from the stadium on matchdays and training days, requiring a daily run to avoid being stuck by the road for long periods without a means of deposit.

Still, we took every opportunity to venture outside of hotel boundaries.

It was enough to get an idea of ​​each city.

Islamabad was reminiscent of Canberra, the Australian capital, with its grand government buildings, wide roads and well-maintained roundabouts. Rawalpindi is marked, while Queanbeyan nestles next to Canberra, a scruffier but more vibrant and colorful neighbor.

Karachi is bustling, crowded and chaotic. Here we had the chance to go out at night to sample a variety of local dishes.

There were no other westerners to be seen as we sat on the sidewalk and sampled various grilled meats, kebabs and nihari – a slow-cooked spicy beef stew – served with roti and naan and listened to the commotion overlaid with the ethereal call to prayer.

Another night took me to the university district to sample biryani followed by ice cream surrounded by winding roadside goats and chatting about everything from politics to food while making new friends with people I I had only met on social networks.

But I soon learned that Karachi is a city of fascinating contrasts.

Through a series of unexpected events, I found myself in a lavish, posh mansion with the high society of Pakistani business and film set, many of whom just wanted to talk about my work as we sat on the edge of a pool on a lavish balcony overlooking the city lights; many of them, of course, were big cricket fans.

There is a local saying that (roughly translated) if you haven’t seen Lahore you weren’t really born and certainly the old town in particular is a feast for the eyes.

Whether strolling through Lahore Fort or dining while overlooking the magnificent Badshahi Mosque, there is an overwhelming sense of the layers of history that have submerged this country for centuries, weaving a tapestry of rich and complex cultural influences.

One of the most fascinating experiences came with a trip to the Wagha border. I traveled with VIP security and, after being given tea, entered what looked like a stadium bisected by a wall and gates that separate Pakistan from India.

The atmosphere was like a T20 match between the two countries; children dressed in their best clothes with Pakistani flags painted on their cheeks, a smiling and happy flag, even some of the chants were familiar, and vendors were walking around selling popcorn and drinks.

After the crowd was stirred up by various performers, border guards arrived from both sides. Up close, the Pakistani rangers were gargantuan mustachioed men wearing headgear that resembled a turban topped with a large fan, exaggerating their already imposing size.

What followed was a kind of highly choreographed military dance, involving fist shakes, steps, poses and kicks that left me marveling at the performers’ flexibility and grimacing in concern for their hamstrings. .

It was hard to figure it all out – especially the coordination that must have been required between the two groups of supposedly hostile guards – but it was quite a party.

Nothing, however, could top the joyful atmosphere of Rawalpindi, Karachi National Stadium and Gaddafi Stadium.

Fans welcomed everyone: their own team, Australian players and even the traveling press. Sometimes when they spotted us through the open balconies which are a great addition to the press boxes, they waved and cheered. Some even made signs for us, alongside the welcoming and often witty signs made for players.

It was, of course, those on the pitch who should be center stage and they obligingly provided the contests who made for an absorbing round of testing in particular (although Rawalpindi’s lifeless pitch left a lot to be desired).

To see the precocious talents of Shaheen Shah Afridi on his own soil and his pantomime confrontations with David Warner, or the centuries-old romance of Usman Khawaja’s homecoming; to see the audacious challenge from Babar Azam and Mohammed Rizwan that prevented Australia from claiming victory in Karachi; to witness the sheer brilliance of Pat Cummins, both as bowler and green captain, as he led Australia to a series victory on Day 15, was to be part of a monumental event that will hopefully -the, will become a normal part of the international cricket cycle.

The players were well aware of this: it was almost certainly the friendliest series Australia had played in years and they embraced their role as ambassadors in commendable fashion.

I can’t wait to go back (inshallah, as they say), because there’s a lot more to experience in Pakistan than a busy work tour allows.

But for now I will take with me memories of the huge kites that hovered above the players in the golden late afternoon light, the generosity and warmth of our press colleagues, the discovery of the spicy food and unique personalities of each city and, above all, the hospitality of strangers and friends.

Oh, and of course, those Babar Azam readers.