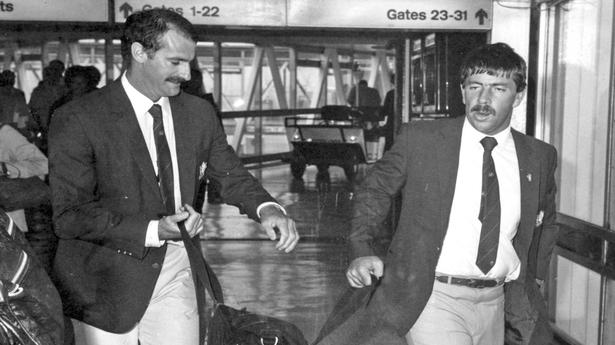 The great Australian cricketer died aged 74 in an Adelaide hospital on March 4, just over a week after suffering a heart attack

The great Australian cricketer died aged 74 in an Adelaide hospital on March 4, just over a week after suffering a heart attack

Dennis Lillee led the tributes on Thursday at a funeral service for his friend and former Australian team-mate Rodney Marsh at the Adelaide Oval.

The great Australian cricketer, who formed a prolific and prolific partnership with pace setter Lillee, died in an Adelaide hospital on March 4, just over a week after suffering a heart attack during a fundraising event in the State of Queensland. He was 74 years old.

Marsh was half of a slogan that was synonymous with the era of Test cricket: “catch Marsh, knock down Lillee.” They combined a record 95 times to clear opposition batters in Test cricket.

Marsh’s casket, with purple and white flowers on top, was in front of the podium as a number of speakers stepped forward during the service. At the end of the service, the coffin made a final circuit of the ground at Adelaide Oval, with former cricketers forming a guard of honour.

“I still can’t believe that our companion and companion for many is gone,” Lillee told a gathering of around 300 people.

“It took me days to write down my thoughts on this amazing guy.

“But I don’t want to talk about his ability to play cricket. . . he was the Rod Marsh person I loved. I must say that it has not always been so; it was something that grew over time, even after our careers ended. Marsh is survived by his wife, Ros, and sons Paul, Dan and Jamie.

Marsh and Lillee made their Test debuts in the 1970-71 Ashes series against England and retired after a Test against Pakistan in 1984. Both finished with 355 dismissals, records at the time for a keeper wicket and for a fast bowler.

Marsh played in the first one-day international in 1970 and retired from top-flight cricket after his 92nd ODI, against West Indies in February 1984.

A left-handed batsman, he was the first Australian wicketkeeper to score a century in Test cricket – against Pakistan in Adelaide in 1972 – and finished his career with three. He went on to head the national cricket academies in Australia and England and was the first director of the International Cricket Council’s World Coaching Academy in Dubai.

His older brother Graham, a retired professional golfer who won the 1977 Heritage Classic on the US PGA Tour, recalled their early days in the state of Western Australia playing cricket with their father.

“Rod couldn’t get enough, throwing himself at any ball that came close to him, even a ball aimed at me that he caught under my nose,” Marsh said.

“I always wanted to be on his team and he would do anything to protect his family,” he said.

“They say younger brothers often walk in the shadow of their older brothers, but little brother, it’s been an honor to walk in your shadow.”